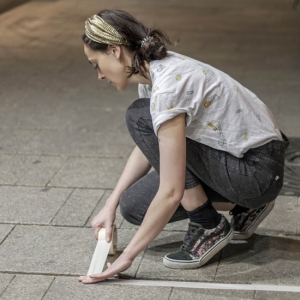 Aïda Gómez was born in Madrid in 1986. She studied sculpting at Kunsthochschule Weißensee in Berlin (Germany) and Fine Arts at the UCLM in Cuenca (Spain).

Working with language games, crossword puzzles and the playful replacement of social codes in our everyday environment, Aïda Gómez finds a way of capturing and challenging the view of passersby, turning them into playfellows in her self-appointed playgrounds in the streets. By placing posters with word search games on billboards, weaving hearts into fences or playing Tetris with missing pieces in a subway station panelling, the artist uses simple yet subversive techniques and what she calls non-violent materials to reveal hidden treasures.

Aïda Gómez is cofounder of the record label El Susto, based in Berlin. She has directed some music videos and publishes fanzines and photobooks in Mercado Negro.