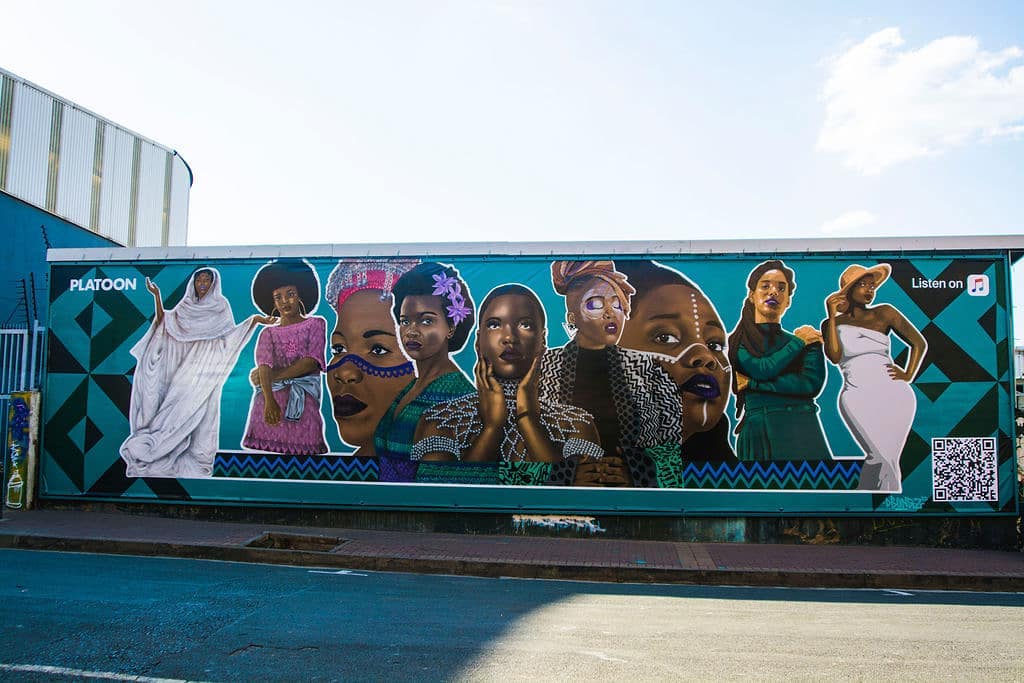 On Friday, 7 August 2020, down the bustling streets of Maboneng, the unveiling of the women wall, titled “The Art of Women” will take place. The mural representing some of South Africa’s most well-renowned activist and feminist musicians forms part of a series by Baz-Art, the largest street art platform in Africa. The artwork and associated music playlist aims to shed light on the current gender-based violence backdrop of SA.

The carefully-selected musician artists are women who publicly make their voices heard on matters vital to their everyday lives. These are the feminists fighting gender-based violence, encouraging women empowerment and equal rights in SA. By using these strong personalities, the idea is to give women of all sizes, shapes, colour and sexuality the courage to be themselves and to convey a message to men, that “enough is enough!”

Melissa Cucci, co-founder of Baz-Art, says the main aim of the project was to enable thought-provoking conversations with the hopes of changed behaviour, especially given the recent surge in violence against women. “The mural serves as a special tribute to women of SA. But most importantly we want it to create positive dialogue and change. By combining art and music, we thought this would make for compelling storytelling, allowing us to share the journey of these powerful women. Street art is a good medium to bring about conversations that people often don’t talk about.”

The mural painted by street artists, Dbongz, says it was a privilege to be a part of this creation process, “My art is driven by narratives. The wall “Art of Women” in collaboration with Baz-Art and Platoon Africa was a great opportunity for me to honour women and their beauty.”

Most of these artists use their music to create awareness around gender, sexuality and ingrained expectations. “We believe in the power of street art and recognize the issues women in SA face. By creating real interaction between the public and the wall, we’re hoping to change perceptions and behaviour in a unique way”, says Cucci.

By accessing the mural’s QR code, pass-byers will be able to scan, listen and discover artists via Platoon Africa, who is also a proud collaborator of the women wall. The music platform has curated a playlist of the featured artists allowing the public to enjoy. The integration of mediums and art make storytelling easy and enjoyable.

Gender-based violence can’t be solved by government alone but rather, all societal groups with a vested interest. From artists and organizations to the private sector and the state, all will need to work collectively to overcome one of SA’s greatest challenges, thereby unlocking the potential that lies within the women of South Africa.

The public will get to appreciate the mural on Fox Street in Maboneng from the 7 August 2020.